My blog / email writing about life in Maine with family while running an independent music company has become a quarterly event it seems.

Simply because I write about our life and we spend so much time living there’s not much time left for writing.

But hopefully this makes each edition of my tales that much more interesting.

Summer in Maine is a time for being outside.

So I switch from the torture machine at the Y: 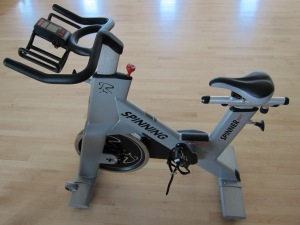 To the torture machine I use outside: 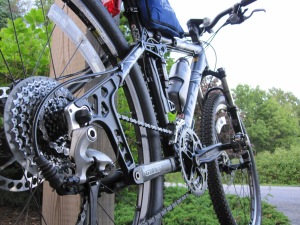 The biggest problem with the switch is a simple matter of gravity.

I use clip-in bike shoes and when you stop riding on the bike at the Y….

You just stop. The bike is on a stand. No problem.

My first ride this summer outside – I forgot about gravity.

At the end of the first big hill on my route I stopped for a break and a quick drink.

Forgot to unclip my shoes because I hadn’t thought about that all winter.

For those of you old enough to remember “Laugh-In” I looked exactly like the guy on the tricycle – who stopped and fell right over.

It was a slow-motion kind of moment – where you think “Oh oh….”.

You realize you’re going to fall over….you can’t do anything about it….even as it seems to take forever.

Landed on a rather sizeable rock.

Think I might have even cracked a rib or two.

But it only hurt to cough….for about three weeks.

I’ve had a great summer of riding….hopefully we’ll have a nice autumn and I can keep it up.  Great changing leaves on my ride as fall comes.

In the meantime – we made the most of our local lake swimming hole.

Maine has unique events that we can’t seem to get enough of.

Different farms open up their premises for visits.

Our first visit this summer was to the Glendarragh Lavender Farm.

26 acres along the St. George River and it’s chock full of different varieties of lavender: 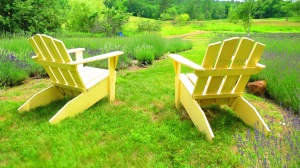 I suspect it has the nicest aroma of any farm anywhere.

Our friends Lorrie and Patrick Costigan started growing lavender in 2007.  Their drying barn on the property dates back to 1790.

In 2009 – they made it easy for us to get all the different kind of lavender products we could want – they opened a lavender store on Main St. in Camden.

It’s so nice to have a unique shop in town that has no duplicate anywhere. The magic of a small town in Midcoast Maine is we’re too small for most retail chains so walking down main street is like taking a stroll in the 1950’s or 60’s. Independent, interesting stores.

Our next farm stop was for wild Maine blueberries.

Every year on Maine Farm Day we head to our favorite blueberry farm to pick some berries and buy some extras.

I never remember the name….but I always recognize the sign:

We didn’t pick this year because it was raining….but they had been busy:

This basket didn’t last long in our hands: 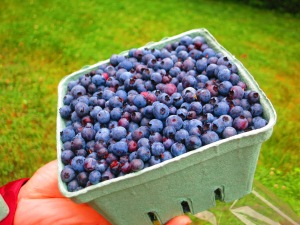 A great stadium with a “green monster” wall the exact size of the one at Fenway and a perfect place to spend a few incredibly inexpensive hours:

This particularly night was one of their “fireworks” evenings and after a very tense, close game – alas they lost. Unfortunately the Sea Dogs after a great season last year are mirroring their big brother team in last place this season.

But a true baseball fan – especially the New England variety – isn’t so hooked on success – it’s the game we enjoy.

The Sea Dogs always do a great fireworks show:

Music, carnival rides, crafts and a kid who’s discovered the joys of the “bungee jump ride”.

This year he did a flip for the first time:

The object of the “Lobster Fest” is of course Maine lobsters.

They serve a lot of them over the five days of the festival.

All in that big tent.

We visited on Sunday – the last day of the festival.

Here’s the count of lobsters served up to the point we were there and the latest batch coming out of the biggest lobster cooker anywhere: 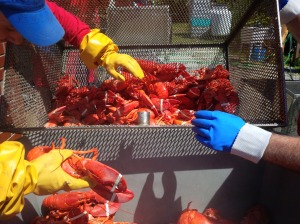 It’s also been a wonderful year for music.

Remember the old commercial for that weird “hair” company?

Well that pretty much describes me.

I run an independent music company.

Because I love music.

Especially singer-songwriters – that’s what our company is all about.

It all starts with the songs.

Ever had a difficult time buying presents for your significant other?

From my own experience – it’s tough.

There’s nothing like working extra hard to get something I think my wife will love….and then get the….”Oh that’s nice…..interesting…..what made you think of that?”

It never even gets out of the box, hangs around the living room for about six months and then straight into a closet or drawer – never to be seen again.

I solved that problem

With tickets for her favorite artists in concert.

This summer she finally got the payoffs for her Valentine’s Day present and her birthday present.

Our 5th time seeing this guy together – nothing like a little “Steamroller Blues”: 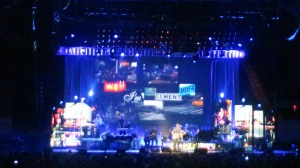 Is there a better song than this?

We decided that this tour with a number of new songs from his new album was even better than the last time he came through Portland – how can a couple of Red Sox fans not love “Angels Of Fenway”: 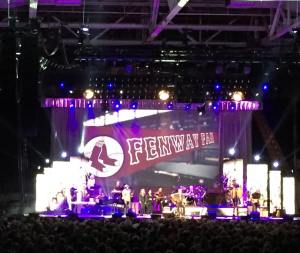 A couple weeks later – it was the second payoff.

This time we had to travel to Boston and use some public transportation – the Green Line to Fenway Park:

The good news – it was hard to get tickets – but we got in – and we were delighted – even though we were basically in the last row:

The bad news…..how is it that the largest guy in the stadium has the seat in front of me….and decides to stand up for the entire concert: 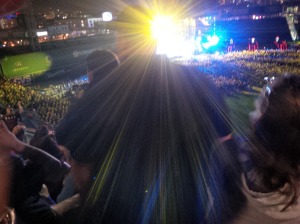 But no matter – it was a great night.

Can’t beat those songs – we love the “Piano Man”: 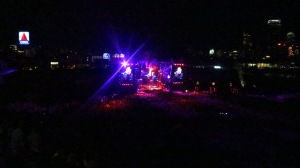 That’s what Mishara Music specializes in.

I learned a long time ago that there are millions of great singers and musicians….but without great songs it’s basically a karaoke music world.

The challenge then for an indie music company – is how to connect the artists we have with the people that might love their music.

Love our radio play – but radio can’t play everything we have.

So we also love our steams on Spotify, Pandora etc and plays on Soundcloud.

But sometimes it’s best to go direct to our fans.

The best way to do that is give songs away – with no conditions.

Amazon has been a great partner in that.

In a number of different ways. 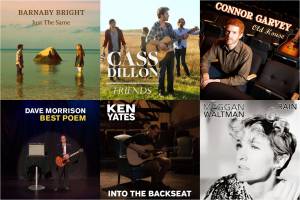 How do they do?

Through Amazon – Mishara Music has given away somewhere in the neighborhood of 1,300,000 free songs.

Feedback has been wonderful from the people that have downloaded free songs.

Here’s a sampling of the response:

Because of the response – more and more people keep downloading.

In the last week (Amazon changes the ranking hourly) I noticed at one point we had twelve positions on the Amazon Top 100 Free Album Chart:

And a few days later noticed that the songs from the latest “sixpack” were all inside the Top 30:

This link takes you to the Mishara digital page on Amazon – there are over 70 free song downloads there:

All of the albums have YouTube Listening links – you can listen all the way through – just search YouTube for the artist and album name.

Click on “Playlists” and you get a link that will play all the way through:

All our music is also on Soundcloud.

Here’s the two latest “sixpacks” as playlists on Soundcloud – just click on the link and start listening:

So it’s been a great music summer but today as I write this – is the first day of school here in Maine.

So we’ve been working hard to squeeze every last second of fun out of summer.

It was a very good weather summer here in Maine but it did rain from time to time.

A rainy day on a weekend?

A great day to head to the movies to see “Minions”

Of course – a new Minion was in order after the movie.

Had to be seat-belted in of course – Ethan is very insistent in that: 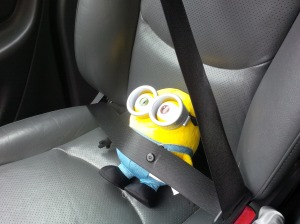 We had to have a “bring your Minion to work day”.

First he went to work with Kim at her office:

Then he took over my computer:

But maybe best of all – don’t know how he hasn’t had one for his first 9 years….Ethan finally got his first Pez:

The highlight of the summer is always the one week a year we get invited to join Kim’s Dad and Stepmother in the house they have for a week at Long Beach Island in New Jersey.

As soon as we arrive it’s off to the beach for Kim for her first beach walk:

I usually work during the mornings and head to join the family at the beach in the afternoon.

Beach and water? Check (I actually prefer swimming to hanging on the sand)

Book? (The # 1 most important item for me on vacation) Check.

Ok, got everything I need:

We actually get up early every year and head to the beach to try and catch some sunrise photos.

Wasn’t the only one up early this year:

This past week was the Union County Fair.

I think we saw just about every parent we know with school age kids on the midway this year.

The highlight of the fair for me is my annual caramel apple:

Yesterday was one last early morning walk on a Maine beach for Kim before school starts and signifies the change of season – even though it’s still officially summer for a while longer and we’ve got some fun things planned.

Beach walks are essential for her well being, No surprise when she gets photos like this:

As the sun starts to travel southward in the sky and our days in Maine are rapidly getting shorter – it’s a good time to post the opposite photo from Long Beach Island….this time the sun setting over the mainland….we spotted the sunset coming fast and actually ran as fast as we could to catch the last rays: 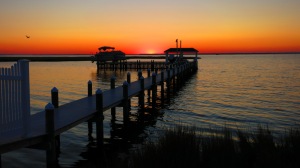 Isn’t that the way this summer has been?

It’s been the fastest summer I remember and it seems like we need to race to slow down…to appreciate what we have.

Especially when we look at the “real” world – it seems that the clowns have escaped from the Funhouse and we’re left watching them being covered 24 hours a day – day in day out.

Seems like this is where we need to build walls: 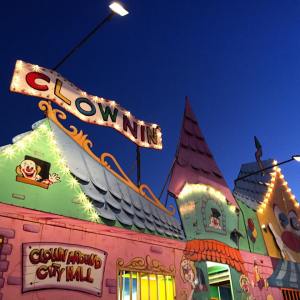