Posts from the ‘About’ Category

Greetings all,
(This is the sort of weekly Marc Ratner blog letter about life in general, which could include just about anything but certainly will mention from time to time, Maine, (where we live), Music, (what I love and the business I used to make a living in), 5 year olds, (because my son just happens to be 5), Bert, (a 4 inch stuffed Sesame Street character that my son gave me to keep me company on business trips – and who has become the star of these missives) and other assorted odds and ends that I keep rattling around in my mind and occasionally spill out onto the keyboard.  This is supposed to be the disclaimer where you can ask to be removed from the email list…..or if you’re reading the actual wordpress blog….can ask to be added to…..but I always clutter it up with other stuff so most people don’t get this far into this paragraph to see that they can be spared this indignity.  If you have read this far and want off – just email me.  Of course that brings up the question – why did you read this in the first place if you want off?  Some questions in the universe will just never be satisfactorily answered….like why I do this in the first place).
Whew. Not that’s done I can get on to business.
Like why is this typical Monday letter going out over a week later on a Friday?
First off because May is one tough month for me.
It’s not work or the weather or anything like that.
It’s three days.
Three simple days.
Mother’s Day.
Our Anniversary.
My wife’s birthday.
If you’re a guy – having all three of those things show up in one month is terrifying.
It’s not like baseball.
You can’t hit .333 – 1 for 3 – and get a contract for millions of dollars.
You gotta bat 1000.
3 for 3.
So last week on our anniversary – the second of the three – the day started with me providing some entertainment for my son’s preschool class.
It wasn’t exactly planned entertainment.
My car wouldn’t start after I dropped him off.  (A wonderful vehicle but it’s 12 years old and has 225,000 miles on it – so these things are going to happen).
So I had to call AAA.
They had to tow.
The teachers brought all the kids up and lined them up along the driveway so they could all watch Ethan’s Daddy’s car get towed away.
A great time was had by all.
Except Daddy of course.
With all the kids around he couldn’t say the kind of words that he might say having his car towed.
And the tow truck driver probably never had an audience like that before.
But the kids loved it.
And we made the bulletin board for the school for that day:

Sometime during the week – some cds actually got mailed out to radio programmers at AAA (which stands for Adult Album Alternative).
Merlowe and The dry Tear:

A very cool record – in some places very “Steely Dan-ish”…..the key radio track is “Thrift Store Pollack” – track # 7 – inspired by a true story where a woman actually found a very valuable Jackson Pollack painting in a thrift store.  Two listens and you can’t stop humming the melody!  You can already find the album on iTunes and Amazon and you can get “Thrift Store Pollack” for free at the free song page at www.misharamusic.com (No email or registration required to download).
And also Barnaby Bright:

What can I say.  Nathan and Becky are professionally trained musicians, both multi instrumentalists, write amazing melodies and songs but the game changer – Becky has perhaps the best female voice I’ve ever heard.  I rarely use superlatives – this is the real deal.  The first track “Gravity” is up on iTunes – the EP goes on sale next Tuesday the 7th and there’s a free track that’s not on the EP on the free song page at Mishara Music.
Listen to Becky sing – there’s nothing like it.
So there was a radio / record convention in Wilmington Delaware a bit over a week ago – Bert attended and had a great time.
He checked out the town near the meetings. Nice opera house: 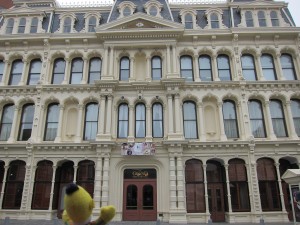 It’s sort of a shaky connection – but it’s true. He did live there.  Marley’s mother at some point moved to Wilmington and Bob went there for a few years. This from wikipedia:
In 1966, Marley married Rita Anderson, and moved near his mother’s residence in Wilmington, Delaware in the United States for a short time, during which he worked as a DuPont lab assistant and on the assembly line at a Chrysler plant, under the alias Donald Marley.
Aren’t we glad he didn’t stay?
Eventually Bert found the Queen theatre the new home of World Cafe Live in Wilmington and the place where the convention was held: 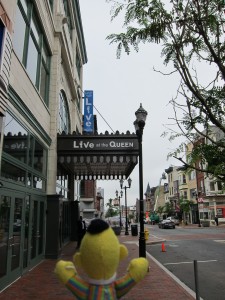 And he had a great time there.
His favorite music act performing was Raphael Saddiq:

And he loved Paul Marszalek’s panel from Media-Mechanics – he always goes front row for his sessions: 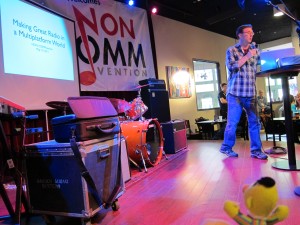 And he loved voting for his favorite songs in the music session:

But what can I say – it’s really about two things when Bert travels.
First thing he has to find a great coffee place and he found one:

And it’s all about the ladies for Bert:

Can you blame him?
Glad that he has a way with the ladies.
Me, I’m not so sure.
With Mother’s Day, our anniversary and my wife’s birthday all in the month of May, I really have to work hard to find some great presents.
I’m not sure I’m always the best at it though……when my car got towed….on our anniversary…..I had to pull out my wife’s anniversary present and give it to her early when she came to pick me up…..
…….drumroll……
….a set of floor mats for her car.
She asked for them.
Really she did.
And she was very nice about it.
But next year I’m asking for suggestions.
Have a wonderful week.
Marc
PS Next week I’ll write about this past weekend – Bert and family went to Rockport, Massachusetts – a great little sea town to celebrate the wife’s birthday.  Her mother treated us…..maybe because I give her floormats for presents…..sighhhh.
Mishara Music